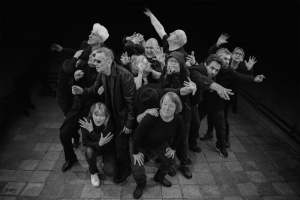 A compelling walkaround production from in situ: – the experts in environmental theatre.

Not simply a performance of Shakespeare’s powerful political drama, but a complex creative response to it. Using Shakespeare’s original text in unusual and thought-provoking ways, splicing in other texts from Plutarch and others, using in situ:’s trademark approaches of extended voice and complex choreographies, Julius Caesar Project circulates around the violent death of a charismatic leader and its catastrophic consequences.