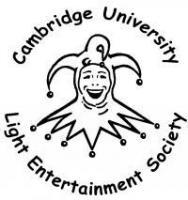 This term's CULES shows are the annual Clements performances (in memory of Emma Clements, a CULE who died of cancer) which are a series of three half hour plays based around a theme selected by the CULES president. This year's theme is "Big Decisions!"

The shows we will be putting on this term for your delectation include:

"A Twist of Fate" written and directed by Dan Tooke

We are a student run-group who aim to bring theatre to those who would normally not get the chance to see it, taking performances to such places as special needs schools and nursing homes. Our second, but equally important, aim is to have fun!