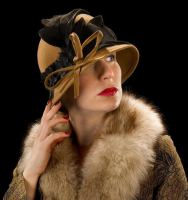 1923: The War is over. While Clarissa Dalloway prepares a party in Westminster, Septimus Smith is diagnosed with shell-shock, their memories and dreams magically intertwining with those of 15 other disparate souls, this hot blue day in June. Conjuring the hopes and regrets of middle- and upper-class London, this adaptation of Virginia Woolf’s celebrated map of hearts, minds and memories offers a compellingly feminine response to the aftermath of the First World War.