H.P. Lovecraft's At The Mountains of Madness 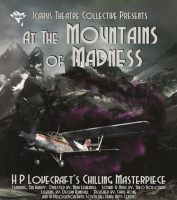 Icarus Theatre Collective brings you a World Premiere, the first theatre adaptation of H.P. Lovecraft’s chilling masterpiece At the Mountains of Madness. William Dyer is brought vividly to life, trapped and tormented by visions of what he saw – and what he could not possibly have seen – in those ancient, Antarctic mountains of madness.

For nearly a century, this cornerstone of Weird fiction has thrilled readers with its tale of a disastrous expedition to Antarctica, and the awful implications of what was discovered.

RSC actor and RADA faculty Tim Hardy rejoins the Icarus Collective for his 50th year working in the industry as the leader of the ill-fated expedition, offering theatre audiences a masterclass in acting.