Return To The Forbidden Planet
By Bob Carlton 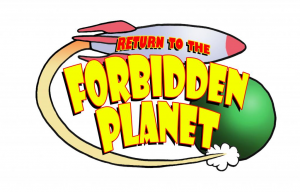 Goodness Gracious, Great Balls of Fire!
Come aboard the starship ‘Albatross’ and join us in an interstellar rock n’ roll adventure! Your crew of highly trained space cadets are ready to whisk you across the galaxy whilst performing a host of cosmic classics by Chuck Berry, The Beach Boys, Jerry Lee Lewis, Roy Orbison, James Brown, Nina Simone and many more.
Bob Carlton’s award winning musical is a bizarre and unique blend of Shakespeare’s ‘The Tempest’ (plus lots of bits from his other plays), iconic music of the 50’s and 60’s and the Sci-Fi cult classic film ‘The Forbidden Planet’. It might sound illogical, captain, but the result is an evening’s entertainment of meteoric proportions.
Will the brave Captain Tempest and his crew unravel the mystery of Planet D’Illyria? Why are the mad Doctor Prospero and his beautiful daughter Miranda the only inhabitants? What secret is the ship’s science officer hiding? Can a robot do the twist? All these questions and more are answered in the next thrilling episode of “Return to the Forbidden Planet”!
Polarity Reversal may occur during performance!