Shakespeare & Me
By Rani Drew 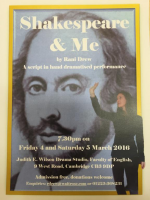 Shakespeare & Me is about Agnes, a student who wants to become an actor and is preparing for the entrance exam for the Academy of Drama. She decides to perform scenes from Shakespeare as part of her test - not the original writings, but her own re-writing of seven famous monologues and one sonnet. Her friend Eva helps her with rehearsals but has very different views, and the two come into conflict over their political, social and religious views. Their discourse on the love and fear in women in their relationship with men reveals aspects about their own lives to each other which they were not aware of before. By the time the practce is over, Eva is a changed person and stays back with Agnes to celebrate her new found freedom.

This is a script in hand dramatised performance.