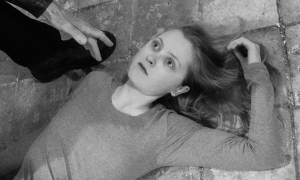 When Georg Büchner died of typhus in 1837, he left behind him a jumble of papers – almost illegible, blotted, fragmentary, unnumbered, untitled. Unpublished for 40 years and unperformed for nearly a century, Woyzeck burst upon the world in 1913, astonishing audiences with its frightening and uncompromising modernity.

Focussing on social deprivation, domestic violence and the ravages of mental illness, Woyzeck is a play for the 21st Century.

A walkaround performance in Cambridge's Leper Chapel - itself a poignant reminder of the devastating effects of illness and deprivation - in situ:’s Woyzeck employs Physical Theatre, Mask and Chorus to bring out the full power of Buechner’s Expressionist masterpiece of madness and murder.