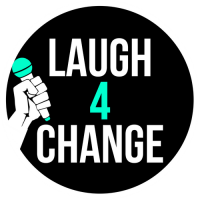 Laugh 4 Change is excited to have Ahir Shah headline our first showcase at the ADC Theatre.
The show will be hosted by the incredible Arielle Souma and will feature 5 student acts including
Patrick Sylla, Danny Baalbaki, Hasan Al-Habib, Matt Malone & Cansu Karabiyik

AHIR SHAH
Ahir Shah is a stand-up comedian whose sharp, intelligent brand of humour features a blend of philosophical inquiry, political vigour, and sweet gags. Ahir's current show, DUFFER, debuted at the 2018 Edinburgh Festival Fringe, where it enjoyed a critically acclaimed sell-out run and earned Shah his second nomination in a row for Best Show at the Edinburgh Comedy Awards. DUFFER is a stand-up show about death and what comes before, life and what comes after, and Bohemian Rhapsody. It is currently on tour around the UK.

ARIELLE SOUMA
Arielle is a force to reckon with and a dynamic "wild card" in a line up. She regularly performs for major clubs like The Stand, Glee Club, Top secret and Angel comedy club.

All proceeds of the night will go to providing relief aid for refugees in Greece.