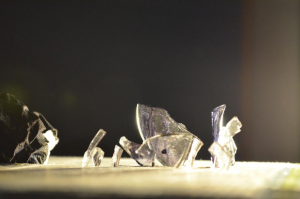 Violet smiles through her middling comedy gig, mulling over the last dregs of her aspirations and many a bottle of wine. Her friend Io struggles to make sense out of the Oracle of the Skip and her elusive threads of prophecy. In the meantime, petty ambitions run amok in the offices of Butler Dramatics, bedrooms are laden with anxious concern, and romance in back alleys isn't quite what it used to be.

Chicane is a short film: a story in reverse that presents the simplicity and strangeness of people and their lives in the most appropriate way: unexplained.