One Night in November
By Alan Pollock 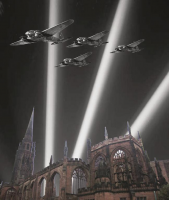 Coventry, November 1940. Katie Stanley is a head-strong young woman training to be a teacher.
While awaiting the All Clear signal from an air raid warning, she encounters the stranded Michael, an Oxford tutor of Romantic Literature, at a railway station. It could be the beginning of a straightforward love story, but nothing is straightforward in wartime. Unknown to Katie, Michael has been forced to turn his linguistic skills to deciphering German codes at Bletchley Park. Katie lives with her family in Coventry, a city living under the threat of war. The Stanleys have no idea how terrible that threat is ... but Michael does.
Following the story of one family's harrowing experience of the Coventry Blitz, One Night in November examines the idea that Winston Churchill had advance warning of the attack.
Was Coventry sacrificed for the greater good? Or to provoke and hasten America's entry into the war?