THE HONOURABLE EDWARD
By David Prosser 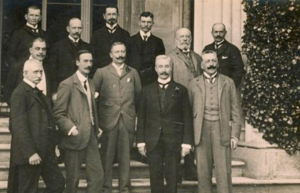 Which country is this?

Population paranoid about 1% of its citizens;

Press at odds with politicians;

Propelled towards war behind closed doors.

Eddie is a well meaning and cash strapped minor Edwardian aristocrat. In the years before The Great War he is an acquaintance of both the King and the Kaiser and finds himself caught in gathering tension. He tries to build bridges, and with one innocent remark, he changes the course of history...

A lifelong soldier, later he's in command on the Western Front. Increasingly frustrated by events, disastrous leadership and the futile loss of life, he and one other commanding officer resist sending their men over the top on 1st July 1916. This remains the worst day in the history of the British Army. One man meets an ignominious fate while the other is treated as a hero and later becomes ADC to the King. Why?