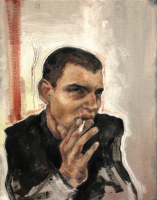 ‘What are two grown men doing together, faking all the stupidities of a straight relationship?’

Certain Young Men is a sensitive, inventive look at contemporary queer relationships, and the ways in which they are represented, performed and perceived through the eyes of mainstream discourse. This production adopts a queer perspective, and employs gender bending to further the already philosophical, hilarious and performative poignancy of Peter Gill’s writing.

Meet Michael and Stewart, a young couple in their 20s, as their scenes transport them through a whole kaleidoscope of moments of their relationship, possible or imagined, and both audience and character struggle to understand what’s really happening.

Meet Andrew, Tony and their dog Judy. On the verge of collapse, their relationship teeters and falls on the verge of domestic violence, sensitively explored and heartbreakingly rendered.

Meet David and Christopher, an older middle-class couple, playing at doing jobs that each considers in some way below his education level. Can Christopher, a divorcee with a child, move past his love for his ex-wife, or will David be unable to accept him?

Meet Terry, a young working-class rent boy, searching for meaning and happiness among the other characters as he encounters them, and grows closer to Robert, a moody young man indeed.

Heading to the Fringe in it's most popular week, with a fantastic evening slot at the original fringe venue, now famed for physical theatre, this show is one not to be missed!

‘Plastic. Annie Lennox. That’s not life. That’s getting a life, that is. Get a life. Get a life. I don’t want a life. Life happens between those things. I have to love you. It’s as though I’ve been born, or joy.’