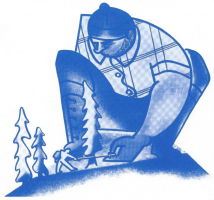 Owing more to Oklahoma than Peter Grimes, Britten’s first musical theatre work, the operetta Paul Bunyan, was written during the early years of his self-imposed exile to America in 1941.

In the operetta, the story of the mythical Paul Bunyan is presented as a metaphor for the human struggles of the emerging New World and the personal struggles of the central character Johnny Inkslinger. In this sense, the opera foreshadows many of the themes of Britten’s later works concerned with a search for identity.

Full of colourful characters and memorable melodies, Paul Bunyan sees Britten at his freshest and most inventive.