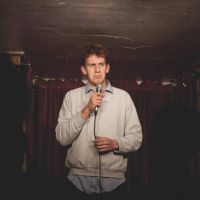 "Straw Man" is an hour of Rob Oldham doing stand up. It's about nostalgia, politics, and family and there are also two jokes about bums. Since graduating, Rob, a former footlight, has won the Quantum Leopard New Act Award and is in the final of this year's Amused Moose National New Comic Award. Come along to Straw Man, as Rob tries to be funny in the town he first started trying to be funny in!