THIS EVIL THING
By Michael Mears 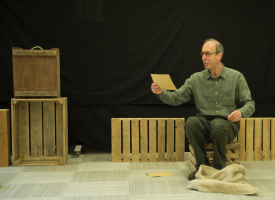 'For God's sake! This protest of yours – is it really worth losing your lives over?'
January 1916: Bert Brocklesby is a young schoolteacher, and preacher at his local Methodist chapel. Bertrand Russell is one of the greatest philosophers of his time. With the advent of military conscription their worlds are about to be turned upside down. Russell could lose his lectureship at Trinity College; Brocklesby could lose his life.
This Evil Thing, acclaimed at last years’ Edinburgh Festival, is the compelling, shocking and inspiring story of the men who said no to war, told by award-winning actor Michael Mears in a breath-taking display of vocal and physical dexterity.
Longlisted for the Freedom of Expression award at the Edinburgh Festival Fringe.
A moving and dynamic retelling of a hidden story.
THE LIST
Magnificent storytelling.
AMNESTY INTERNATIONAL

As well as two previous acclaimed solo plays (SOUP, about homelessness, Fringe First Award winner at the Edinburgh Festival - and TOMORROW WE DO THE SKY, about factory canteen workers) Michael Mears has written and performed five specially commissioned solo plays for BBC Radio 4. Onstage, he has performed for the Royal Shakespeare Company, the National Theatre and the Peter Hall Company on numerous occasions, as well as in London’s West End, most notably for nine months as Arthur Kipps in THE WOMAN IN BLACK.
‘Michael Mears is that rare combination of fine writer and formidable actor.’ - Time Out ‘One exceptional man' - The Observer

Bertrand Russell and all other roles – Michael Mears

with music by – Helen Chadwick