Songs for a New World
By Jason Robert Brown 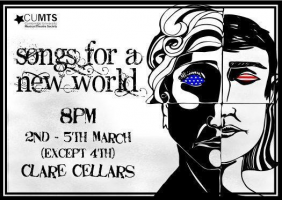 "It's about one moment. It's about hitting the wall and having to make a choice, or take a stand, or turn around and go back." (Jason Robert Brown)

Jason Robert Brown's Songs for a New World transports us across time, dealing with the issue of that transitory time, that one decision, that one moment. With the American Dream as its focal point, Songs begins with a glance across the oceans to the New World and introduces us to a variety of characters facing decisions in struggling to obtain that which they desire.

An abstract musical consisting of thematically linked songs brought to life by a a cast of just four, Songs for a New World combines elements from almost all genres of popular music as well as fusing these styles with traditional musical theatre and classical models. Vocally challenging and theatrically intimate, Songs promises to be an exciting and adventurous production.