UKIP: THE MUSICAL
By Joshua Peters and Adam Woolf 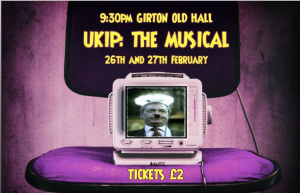 On the eve of the 2015 General Election, UKIP is in crisis. A power struggle between Nigel Farage and his mutinous Deputy, Paul Nuttall, threatens the very existence of the party, with Nigel's political career, and marriage, on the line following a series of shocking allegations about the nationality of his beloved wife.

Meanwhile, an undercover journalist sent to expose UKIP's darkest secrets finds himself torn between two worlds as he is drawn ever closer into the twisted heart of the organisation.

No political figure or party will emerge unscathed as the characters sing and dance their way towards the final showdown. The Big Debate is looming, and the future of the country is up for grabs.