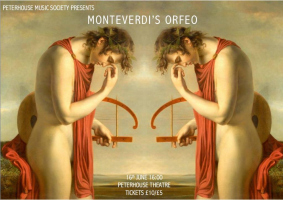 When Orfeo’s beloved wife Euridice dies, he dares to go down to Hades in an attempt to win her back. In doing so, he must use his unique gift of music to confront the forces of the Underworld. This gem of Renaissance opera poses many questions about the power of music, the position of the poet in the world, and his relationship to gods and mortals.
This production of what is considered by many to be the first true opera will be performed in Italian in the wonderful Peterhouse theatre. We will seek to explore both the Classical roots and the Renaissance conception of the work in the context of our later, post-Romantic perception of the nature of art.