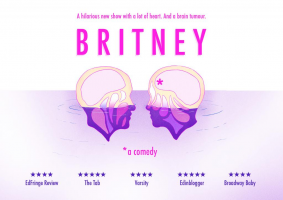 Fresh from a successful run at the Edinburgh Fringe, Britney is the true story of what happens to two best friends when one of them gets a brain tumour. It's told by a host of characters, including a stuffed dog, the population of a small Welsh town, Rubeus Hagrid, a pair of Hollywood Producers, the two best friends in question, and some bubble wrap.

Hilarious, poignant and touching, this show is an uplifting reminder that laughter is sometimes the best medicine.*

‘I have never been so moved by a Fringe performance before. Britney touched me in ways no comedy show has.’ – Edin Blogger ★ ★ ★ ★ ★