The Orchard
By Eve Judah and Ciaran Walsh 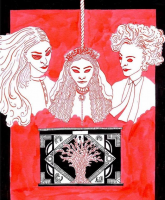 “I’m in a wood. Before this I was in a city. In that city there were numbers. I cut them into whole numbers. I made chains of them, always the same, like paper dolls.”

Ivan lives in a state defined by whole integers, a state above which the noose of the ‘Hangman’ of village lore hangs, a state however that has realised the efficacy of his groundbreaking scientific work and is hunting him down in order to cut off the potential of his discoveries. Will Ivan be able to escape the clutches of the state, and even if he does, will the darker side of his discovery and the history of his society catch up with him?

Come join us for this exciting new piece of student-penned drama and delve into a world so defined by mechanical processes you'd be hard set to find an apple, let alone an orchard…