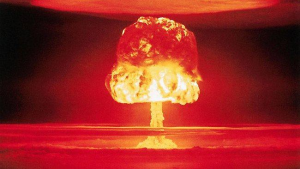 A gritty new drama set aboard Britain’s last hope in a global war. It’s 2030 and the War of Treaties is entering its fourth year, as the disastrous shockwaves of conflict continue to rage across the globe, embroiling nation after nation in an unwinnable conflict. The West lies in ruins, the East equally so, both devastated by the first use of nuclear weapons since 1945. And yet both sides fight on.

A crew of five loyal servicemen and women are manning the control room of Britain’s last surviving nuclear submarine. They’ve been waiting silently in the South China Sea for 7 months, with no communications from London, when disaster strikes and the submarine becomes fatally damaged. With less than an hour to live, the crew must decide what their final act on earth will be. Would you launch the nuclear missiles on board?

The human condition unravels as loyalties and identities breathe and die in the final hour of HMS Salvation, Britain’s last surviving nuclear submarine in the War of Treaties.