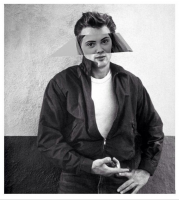 Dean is a sixteen year old transgender boy, waiting for his world to catch up with his mind.
He may be secure in his own identity, but Dean is yet to learn that he has only won the battle, and still needs to win the war, as those around him rocket between acceptance and alienation, straining the foundations of his support network to breaking point. As his parents' marriage crumbles, his own on-again-off-again relationship with childhood sweetheart Josh shudders and struggles to evolve.

In a complex examination of what it means for an individual to transition, Evan Placey’s 2014 drama explores the potency of teenage love, the fragility of family bonds and, above all, the fluidity of both gender and sexuality.

A love story about transition, testosterone and James Dean.