Come Back to Bed
By Isla Cowan 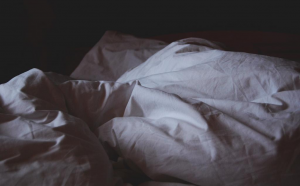 Clara and Ben are ‘casually sleeping together’, caught up in a turbulent and destructive relationship, apparently devoid of love. Clara is distracted and distant. Ben is desperate to open her up and develop a closeness between them.

As the barriers between Clara and Ben break down, physical violence and violent love destine the couple for mutual destruction. Set on one rainy afternoon, the intimate bedroom exchange focuses on their unhealthy, habitual pattern and inability to communicate. But, their apparently meaningless and mundane conversation actually delves down into the core, and deeply affects each of them. Here, loneliness takes the form of love.

This play is a one-room drama that combines physical theatre with intense naturalism to portray the familiar struggle of Clara and Ben. With the stage and script both stripped bare: ‘Come Back to Bed’ is a performance of raw emotion and physicality, as two people are pushed to their limits.