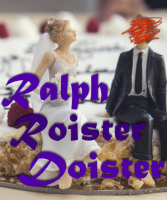 Join the Marlowe Society as we set out on a new venture--exploring the lesser-performed plays of the early modern period through script-in-hand stagings. On March 14, we begin with Nicholas Udall's 1552 comedy about a dim-witted man convinced of his own importance attempting to force himself on an unwilling woman. Sound like anyone in the news today?

Presented in partnership with the Centre for Mediaeval and Early Modern Law and Literature, the evening will include a panel discussion on the legal issues invoked by the play. Tickets are free, but space is limited!