The Oppression Olympics (Edinburgh Fringe)
By Mark Bittlestone and Will Dalrymple 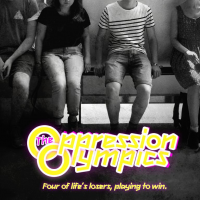 Everyone loves the idea that their life cannot get any worse, especially the four strangers who find themselves waiting for the number 51 bus into town. What begins with harmless eavesdropping soon becomes an argument over who has had the worst life. They are prepared to share everything and concede nothing.

Ruth is bereaved, Alex is gay, Milo’s a virgin, and Hayley is lonely. In the eyes of these Proud Losers, they’ve already won, but that’s not for them to decide. The Oppression Olympics takes an irreverent look at sentimentality and self-pity.