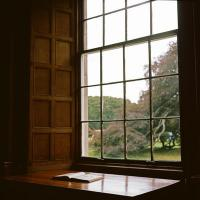 Northanger Abbey, first performed in Selwyn Chapel in Michaelmas 2018, is going to the Edinburgh Fringe! Join us at the Institut Français Écosse, one of Edinburgh's most lovely Neoclassical buildings, right on the Royal Mile!

But when a young lady is to be a heroine, something must and will happen to throw a hero in her way.

Seventeen year old Catherine lives a quiet life in the country with only her beloved Gothic novels for excitement. That is, until she is brought to Bath, where her inexperience leaves her in awe of bustle of city life and the glamour of her new friends. But before long Catherine finds herself tiring of the gossip and games of courtship, and can't resist an invitation from the Tilney family to accompany them to their family seat, Northanger Abbey. Enchanted by the estate's Gothic grandeur, Catherine finally feels as though she has fallen into one of her favourite novels, but soon discovers the pitfalls of confusing fact and fiction.

Jane Austen's Northanger Abbey is a heartwarming exploration of the delights of youth, love, and above all, a good novel. Full of Austin's distinctive humour and larger than life characters, this new and unconventional adaptation captures the wit and originality of the 19th century classic.

"You will probably never see the likes of this again: it is impossible not to be charmed, gripped and thrilled." – Varsity, ★★★★★

"The spirit and vivacity of [...] Jane Austen's endearing satire of the Gothic novel [...] translates beautifully across to this production" – TCS, ★★★★