Six Characters in Search of an Author
By Luigi Pirandello, in a new version by Atri Banerjee 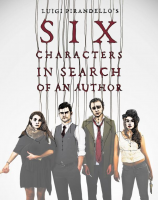 Looking for a show? So are they.

"So you’re calling this the profession of madmen, then? We’re all crazy?"

Pirandello's modern masterpiece is hurtled into the present day in this thrilling, visceral new adaptation by CUADC. When a rehearsal is interrupted by six characters swarming the stage, demanding that their tale be put on, what can a director do? He's got a slot booked on one of the Mile stages and there's flyering to be done.

When he eventually agrees, however, the limits of reality and imagination begin to blur as the characters are driven towards tragedy.

Come along if you have the time - after all, it's only a show.

SIX CHARACTERS IN SEARCH OF AN AUTHOR returns to Cambridge after an acclaimed run at the Edinburgh Festival Fringe 2013.

The Characters are coming back.