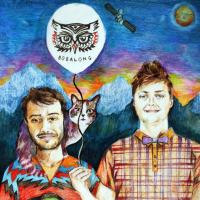 Bobalong! Welcome to the show! Unsung singing adventurers Joshan and Thomas want you to be a part of their world-famous Bobalong Club! Come along and join them as they journey (before your very eyes!) through mountains and valleys, cities and seas, bogs and rainforests, on quests, escapes, whaleback chases and stormy sea voyages in a leaky boat. In their adventuring, Josh and Tom combine familiar (and unfamiliar) fairy tale stories and characters with magical music and dazzling costumes to create a bizarre and surreal world overflowing with all things weird, and everything wonderful. Anyone can be a member of the Bobalong Club, so long as they come to the show of course. And fill in the relevant health and safety forms. (Just joking.) Parents, children, brothers, sisters, aunts, uncles, grandpas, grannies, grannies’ pets (maybe): there’s so much for so many in ‘Bobalong’, and still plenty more.

‘Bobalong’ is brought to you by two former Cambridge Footlights, who have written for and performed in shows such as the ‘2014 ADC/Footlights Pantomime’, the ‘2014 Footlights International Tour Show: Real Feelings’ and the ‘2015 Spring Revue: A Whole Lot of Bother’.