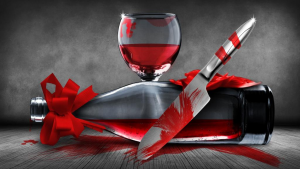 Set in 1940s Brooklyn, Arsenic and Old Lace paints the portrait of the two elderly Brewster sisters who drink tea, gossip, knit…and poison lonely old gentlemen who turn up at their door. As their nephew Mortimer seeks to place the blame for the pile of bodies on his insane brother Teddy, a third homicidal brother Jonathan turns up with his plastic surgeon-cum-alcoholic sidekick Dr Einstein. As the body count grows in equal proportion to the hilarity and shocking wickedness, the Brewster family reveal insanity lurking in every corner.

Kesselring’s most famous work opened on Broadway in 1941 and was described by the New York Times as "so funny that none of us will ever forget it". A highly successful film version with Cary Grant followed swiftly in 1944. With its unique combination of sitting-room set-piece elegance, razor-sharp humour and alarming depravity it is no wonder that this play has retained its relevance, regularly undergoing revivals on Broadway and in the West End.