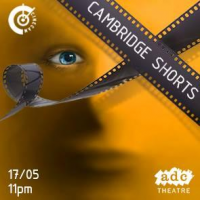 In a truly unique evening, you’ll have the chance to experience the best of Cambridge’s filmmaking talent.

Tachyon: Written and Directed by Mark Danciger. A scientist creates a machine that can send messages back in time. The consequences are beyond her worst nightmares. A tense sci-fi thriller.

Prelude: by Bekzhan Sarsenbay. A revolution is on. People are rioting in the streets. The workers and actors of a prestigious theatre are left to wonder who is going to win, and plan for a uncertain future.

Clive Benderman: Written and Directed by Tom O Mara. Clive Benderman, a 31-year-old, data-entry worker from Swindon. After forgetting to buy a leaving present for his co-worker, Clive decides to make amends.

Marie hasn't left her hotel room for a fortnight now. The door is locked and her mysterious acquaintance has not returned since taking her there. Accompanied only by a wooden owl, tins of fish and trapped spiders, she starts to write...

A warped examination of solitude and confusion, OWL #307 is as disorientating as it is relatable.