Love and Information
By Caryl Churchill 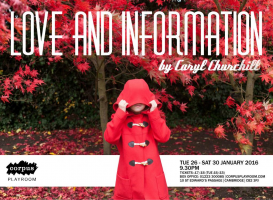 A kaleidoscope of emotions and situations, with six actors and over fifty characters, 'Love and Information’ gets to grips with the fundamentals of what it is to be alive. A series of scenes that would often be viewed as too odd or conversely too commonplace to be put on stage: a form of drama that’s somehow both familiar and entirely new. A sketch-show meets serious drama.

Caryl Churchill’s 2012 play shows the poetry of life, from the ordinary to the peculiar, in snapshots varying from mere seconds to over five minutes.