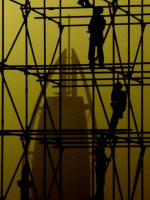 ‘As Gregor Samsa awoke one morning from uneasy dreams, he found himself transformed in his bed into a gigantic insect.’

Berkoff’s Metamorphosis, adapted from Franz Kafka’s 1912 fable Die Verwandlung, is a gruelling and pertinent commentary on the role of the worker in society. Gregor slaves relentlessly to provide for his family. His self-neglecting existence eats away at him, until he becomes a metaphor of his state: a giant beetle, a creature so lowly that it eats its own excrement. Exhausted of empathy and disgusted by him, Gregor’s family leave him to waste away, and Gregor becomes a martyr for a system which took but gave him nothing. Does work really pay, and who pays the greatest cost?