Spurt of Blood
By Antonin Artaud 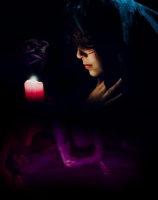 "I love you and everything is beautiful."

An immense wheel turns and cuts through the wind. A hurricane separates two young lovers. Across the world, two Stars collide, a prostitute's hair is set on fire and a priest searches a banquet of rotting food in the hope of finding a piece of Swiss cheese.

This new adaptation of Antonin Artaud's 'Spurt of Blood' incorporated with writing from Artaud's greater body of work and sequences of dance and music, brings to life the genius and the madness of the world's greatest proponent of the Theatre of Cruelty. This is a journey unlike any other.