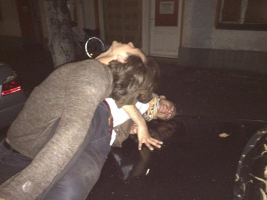 The first performance of the first word of the first piece of absurdist theatre, when put on in Paris in 1896, resulted in a riot.

Before the start of the premiere Alfred Jarry walked onto the stage and said ‘You are free to see in M. Ubu however many allusions you care to, or else a simple puppet – a school boy’s caricature of one of his professors who personified for him all the ugliness in the world.’

The play tells the story of the rise of Ubu Pa to the throne of Baloney and his eventual fall, in absurd mockery of everything from the bourgeois to Shakespeare’s greatest tragedies.

A basement fever-dream, gutter rock, an anarchic farce, Berlin techno… This show really has it all. Wow.