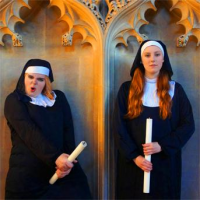 It is 1725 and, in the convent of Saint Simeon, another sinner has arrived to repent. Little does this young lady expect to become the audience to one of the most scandalous stories eighteenth century England has to offer.

Bad Habits sees one woman’s struggle to capture the heart of a man who gets bored as soon as they have slept together. Fantomina is forced to don increasingly outlandish disguises in order to secure herself just one more night. With the help of a sarcastic vicar, beleaguered innkeeper and a handful of unconventional nuns, both of our heroines will learn that debauchery is really rather fun, and that perhaps happy endings can be reached without the need for wedding bells.
Bad Habits is the farcical tale of one woman's pursuit of love and sex. But mostly just the sex.

Bad Habits reimagines Godfrey and West's earlier work, Love in a Maze, which was described as "an absolute gem of a show" (CTR, 4 stars) and "astoundingly unconventional" (Varsity, 4 stars).

The Nun With The Violin – Marcus Fantham