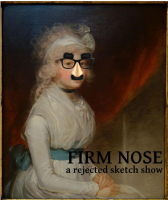 Everyone who’s ever done a sketch show has those sketches that seem hilarious at the time but, upon reflection, can never see the light of day. FIRM NOSE stages these ‘creatures’, and shines the harsh light of day upon them, to watch them writhe and thrive on the Corpus Playroom stage. These ‘sketches’ go so far beyond funny that they swing back around and hit you in the face with how funny they are. Like big, friendly, non-offensive boomerang(s). Have no fear, these are not things that go beyond the line and OFFEND, but things that go beyond the line and beFRIEND!

Fresh from the dark regions of Google Drive and performed by a rag-tag team of failed legends and fading stars, these are ‘sketches’ that have been ‘put’ in the folder marked FIRM NO’s (get it???)