The Seventh Seal
By Ingmar Bergman 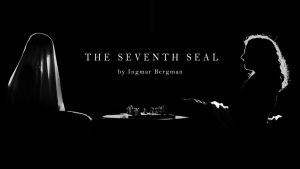 Medieval Sweden. A disaffected knight returning from the crusades encounters Death, who agrees to spare his life for the duration of a game of chess.

While they play the knight and his squire travel through a countryside ravaged by the plague, encountering a cross-section of medieval society on the way, including a group of actors, a witch condemned to burn at the stake, and plague victims.

Simultaneously an existential allegory and a social tragicomedy, the original Seventh Seal catapulted its director, Ingmar Bergman, to international fame, and is now considered one of his masterpieces. This tongue-in-cheek adaptation was inspired by Emma Rice’s work with Kneehigh.

The Seventh Seal broaches timeless questions – the prevalence of suffering, the inevitability of death – with a combination of theatrical irreverence and Bergman’s trademark, caustic wit.