A Midsummer Night's Dream And Other Dream Stories from the Ballet 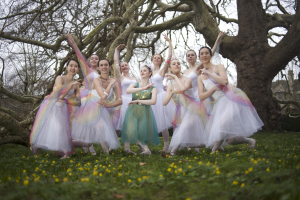 This exciting show will feature not one, not two, but three ballets in a triple bill! The programme will be fast-paced and plot-driven, and provide lots and lots of opportunities for the club members of all
experience levels to shine in various different ballet roles. The ballets are all connected by the theme of 'dreams', and all are presented as unabridged ballets just with about two hour of total running time. The performance will take place again at West Road Concert Hall, with three shows on 28 and 29 February 2020. This is an original production in terms of story adaptation, choreography, and theatrical aspects. With each story, the ballet club aims to deliver completely different atmospheres and vibes. Even though the main focus is on the classical ballet, the choreography is also inspired by various other dance styles - neoclassical, contemporary, Indian dance, and more.

The first piece on our programme will be The Sorcerer’s Apprentice music composed by Dukas. In this ten-minute story, we meet a young apprentice of magic who attempts to automate their task of filling a basin of water while their master the Sorcerer is away, to nearly disastrous effect. The broom that the apprentice enchanted to carry buckets of water proves to be unstoppable, and before long a whole army of brooms marches across the stage spilling water everywhere!

For our second piece, we will be presenting to our wider audience - Scheherazade, an original ballet produced by the club that successfully debuted as an ADC Late Show last year. This ballet is set to Rimsky-Korsakov’s symphonic interpretation of the Persian Folktale - One Thousand and One Nights. It tells the story of Scheherazade, a courageous young woman determined to end the murderous regime of a jealous Sultan by becoming his bride. She does so by telling stories, including those of Sinbad the Sailor and the Roc Birds, Alaeddin and the Wonderful Lamp, and Ali Baba and the Forty Thieves. After one thousand and one nights, Scheherazade runs out of the tales that have been keeping her alive, and the Sultan orders her to be executed at dawn. But as the Sultan sleeps, he dreams Scheherazade and the tales she told, and as he is haunted by the stories' characters, he begins to piece together the metaphor of his own life that she had woven into them. Shahryar awakens to see Scheherazade standing before him, heartbroken, and he embraces her tenderly, promising to spare her life and to love her forever as his Queen.

The third and featured piece on our programme will be A Midsummer Night's Dream. Set to Mendelssohn's famous incidental music, this ballet tells a story of fairy mischief and pranks, adapted from the Shakespeare play of the same name. The Fairy King Oberon schemes to get back at his wife Titania for refusing to gift him a changeling child by making her fall in love with a man enchanted to look like a Donkey. Meanwhile, the mischevious Puck meddles in the affairs of two mortal couples, who in the end all marry happily.