Accidental Death of an Anarchist
By Dario Fo 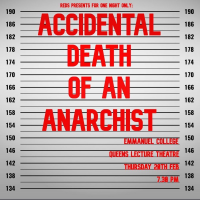 Inspired by true events, this fast-paced piece of theatre takes place in an unnamed police station where a farcical re-enactment of events is conducted to determine the true circumstances behind the mysterious death of a suspected anarchist who falls from a police station window whilst in custody. Was this a mere accident, or is it the deliberate product of a society plagued by foul play and deviance? This exposure of police activity is dramatised through bravado, ludricous comedy and devilish slapstick.

Accidental Death of an Anarchist is the most famous play by Dario Fo, recipient of the 1997 Nobel Prize in Literature. This piece of extraordinary writing is rarely performed on stage and is a masterpiece in comic absurdity.