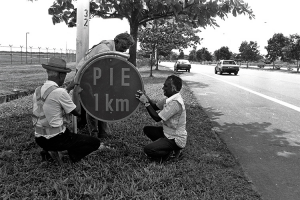 On the eve of Singapore’s National Day in 1988, 3 people are killed along the Pan-Island Expressway (PIE), Singapore’s oldest expressway which cuts through the heart of the country.

An interrogator has 60 minutes to question James, whose script, ‘PIE’ foretold these 3 deaths. Somehow surviving a car accident along the PIE that killed both his parents just moments after he was born, James grew up to become an unsuccessful playwright who now faces accusations of murder.

As the fragmented story of what ‘actually’ took place unfolds, the line between the ‘real’ and the ‘official’ narratives blurs, as James is forced to confront an interrogator intent on writing her own script - that James is a Communist conspirator who masterminded these deaths to ignite widespread dissent. Set against the backdrop of the global Cold War and the 1987 ‘Marxist Conspiracy’ in Singapore, Pan-Island Expressway promises to be a riveting comedy, political drama and whodunit mystery - all in one play.