The Lower Depths
By Maxim Gorky 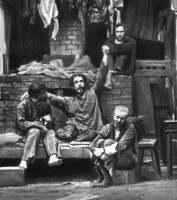 “Them? Call them people? Muck and dregs—that’s what they are! I’m a workman—I’m ashamed even to look at them. I’ve slaved since I was a child. . . . D’you think I shan’t be able to tear myself away from here? I’ll crawl out of here, even if I have to leave my skin behind—but crawl out I will! Just wait . . . my wife’ll die . . . I’ve lived here six months, and it seems like six years.”

The Lower Depths is a 1902 classic of Russian socialist realism. A mismatched crew of social recluses, ex-convicts, alcoholics and paupers live together in a ramshackle boarding house. There, some dream of one day extricating themselves from the “depths”, others reminisce about the days when they were “somebodies”, but, try as they might, they are unable to fight the gravitational pull of circumstance. The inhabitants find their daily lives altered by the appearance of a wanderer called Luka who encourages them to reform and make a new path for themselves in life. For the disillusioned dwellers, there is now a choice: to drink or to dream.

This production is set in 1992, post-collapse of the USSR. The 90s were a tumultuous period for Russia, as economic disaster and social upheaval accompanied rapid Westernisation and sudden cultural autonomy. The golden stars of the Soviet Union now find themselves squatting in a derelict flat and, with their lives turned upside down, they struggle to come to terms with the burden of existence. Darkly humorous “The Lower Depths” is an exposé of the human condition quite unlike any other in theatre.