In Denial
By Cian Morey 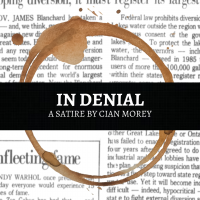 In the near future, PR hell breaks loose in Whitehall when Graham Barnett MP, newly-appointed Minister for Climate Change, accidentally denies the existence of global warming on his first day in office. Meanwhile the UK reels from the impact of the recently-suppressed pandemic, and all eyes are on the looming publication of an inquiry report into the Government’s less-than-flawless handling of the crisis. Over the course of one chaotic morning, jobs are jeopardised, bucks are passed, and Graham just can’t seem to get his coffee.

In Denial is a new student-written satire of last-ditch political posturing gone terribly wrong, but in its own terribly funny way.