Not Even the Dogs 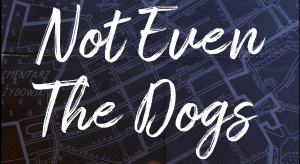 It’s time to tell a story that you’ve never heard before. A story that is not only culturally significant for Jews but also important for all of us as human beings. It is a story about resilience, about the best and worst we as people have the potential to be and, most importantly, it is a story about stories.

The story we want to tell takes place in Warsaw during the Second World war, more specifically the brutal Warsaw Ghetto, where the Jews of that great city were forced to live during the Nazi occupation. Our protagonist is Emmanuel Ringelblum. Through his creation of the Oyneg Shabes, a secret group of archivists, he would fight the Nazis by collecting and burying thousands of essays, articles, poems, payslips, photographs, songs- testimony to Jewish life and living- so that if indeed the Jews were wiped out of history by their oppressors, their true voices would survive in some capacity.

This devised piece of theatre celebrates life in the face of certain death. It celebrates Jewish culture as beautiful, wonderful and full of stories. Ringelblum understood and celebrated this more than anyone.

We intend to honour his legacy.