The Vagina Monologues
By V (formally known as Eve Ensler) 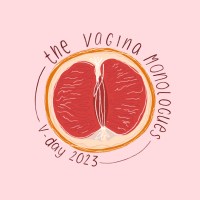 The Vagina Monologues is a play by Eve Ensler in the form of a series of monologues and choral pieces, which honours female sexuality in all its complexity, mystery and power, giving voice to female experience, fantasies, fears, angers, and pleasures, and calls for a world where all women are safe, equal, free, and alive in their bodies. It is a play about unifying the body and identity, about claiming language, about community. Based largely on interviews she conducted with 200 women about their views on a range of important topics through the eyes of women of various ages, races, sexualities, and other differences.

We are also hoping to add some new monologues to the play (something which Ensler celebrates), from new student writing. Not necessarily all of Ensler’s monologues need be performed.

It is a piece of political theatre and is performed around the world on V-Day (14th February) in order to raise money for the grassroots charity chosen that year. Every year, the play is performed on hundreds of university campuses as part of V-Day's College campaign.

Get involved with The Vagina Monologues:

Looking for new student writing (primarily monologues) to become part of a production of ‘The Vagina Monologues’ which is being put on in February to raise money for charity.

• 6+ ‘ACTORS’ (who perform the monologues and also are part of the chorus pieces) • NARRATOR • ‘MALE VOICE’s: Father, Husband, Bob