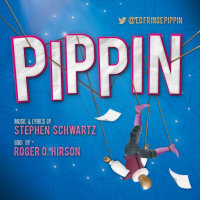 The original 1972 Broadway production of Stephen Schwartz (best known for his work on Wicked, Godspell, Pocahontas, The Hunchback of Notre Dame, and The Prince of Egypt) and Roger O. Hirson's 'Pippin' won five Tony Awards, and the 2013 Broadway revival won another four.

The story is told by a troupe of actors, led by the ‘Leading Player’, a mysterious figure who breaks the fourth wall and blurs the distinction between the world of fiction and reality. The troupe stages the story of Pippin, a young prince who is searching for his place in the world. Rather than following a linear structure, the show resembles a picaresque adventure-story, consisting of a number of fantastical episodes: Pippin goes to war with the Visigoths, murders his father, becomes a tyrant, flees to the countryside and falls in love.

Pippin contains a masterful score by Stephen Schwartz, with upbeat pop-inspired numbers that propel the story along with wit and energy, and many of its memorable songs, from Pippin’s soaring ballad Corner of the Sky to Berthe’s rousing (and audience-participatory) anthem No Time at All, have become established classics.