Tristram Shandy: Live at the ADC!
By Will Dalrymple 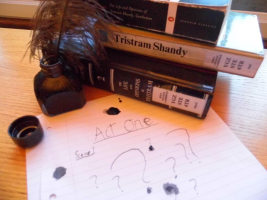 And it was written: let there be a book tour. Tristram Shandy's sizzling autobiography, 'The Life and Opinions of Tristram Shandy, Gentleman', has just hit the shelves and the author is touring the country, wowing audiences with a theatrical extravaganza which captures the scandal, wit and wisdom of this instant classic. Morrissey's autobiography went straight to Penguin Classics; Tristram's got Oxford and Wordsworth as well. Although we tend not to talk about the Wordsworth edition.

Join us at the ADC, for four nights only, and revel in the sex, the scandal, the song, the dance, the love, the lies and that bit where he gets his thingy trapped in a sash window. This new adaptation of Laurence Sterne's hilarious and groundbreaking novel takes you on a poignant and compelling tour through some of the life and many of the opinions of Britain's finest Tristram.