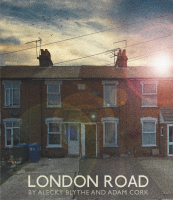 ‘It took their lives for them to help us.’

In 2006 Steve Wright, of 79 London Road, was convicted of the murders of Tania Nichol, Gemma Adams, Anneli Alderton, Paula Clennell and Annette Nicholls. The deaths of these five sex workers shook the quiet rural town of Ipswich to its core.

London Road documents the experiences of the residents as the police and the media flocked to their front doors, grappling with what it means to be at the epicentre of a tragedy.

Real words from real events set to an innovative musical score, London Road is a gripping verbatim musical that tells the story of a community rising from the depths of trauma.

Nominated for 4 Olivier Awards, winner of Best Musical at the Critic’s Circle Theatre Awards and adapted into a film starring Olivia Colman and Tom Hardy, London Road is a groundbreaking piece of experimental musical theatre.