The Pillowman
By Martin McDonagh 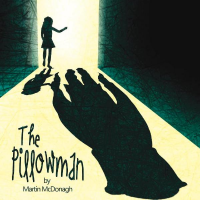 “It isn’t about being dead or not, it’s about what you leave behind”

So says the writer Katurian, who finds himself in police custody after it is discovered that several of his short stories have a suspicious connection to a series of recent child murders. Whilst Katurian thinks that he’s been arrested for getting on the wrong side of the regime in this totalitarian state, the good cop/bad cop double act Tupolski and Ariel have other ideas. When Michal, Katurian’s brother, is brought in for questioning, Katurian’s involvement in the crimes no longer seems as tenuous as it first appeared... nor the connection between fiction and reality.

Martin McDonagh's satirical black-comedy brings together elements from across the latter half of the 20th century, from the lies of countless Presidential administrations to the fall of Soviet Russia.

Please be aware that the play contains several triggering themes, including allusions to abuse and rape