The Ladies @ Edinburgh Fringe
By A Tyrrell 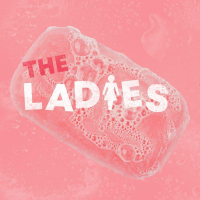 Harry and Ella walk into a bar. They’ve been together a year now. It’s going well.

Until suddenly – after a not-so-quick trip to the Ladies – it’s not.

Join us in this intimate venue and watch the drama unfold in real time, first from the corridor outside, and then from within THE most glamorous, the most mysterious, the most sacred of all locations: the ladies’ loos. During Act 1, lament the many impediments of being male – waiting for your girlfriend (seriously, how long does it take to put a tampon in?), neglected, powerless, and, as always, excluded from the action. During Act 2, see what you were missing – revel in the glory of being female, of being welcomed into this chapel of piss, poo and periods, where the gossip and the drama flows as readily as the sickly pink soap from the silver dispensers. And most importantly, find out what happened behind cubicle doors to rock this Perfect Couple.

New endings and old beginnings, frustration and embarrassment, humour and tenderness – this play examines the walls we build around gender and sexuality, and the struggles of navigating a queer new world when those walls unexpectedly come down.

‘The Ladies is one of the best pieces of theatre I have seen during my time here: it is funny and witty, it is utterly sensitive and articulate, and the sheer complexity and nuance of growing up that Tyrrell is able to so aptly cram in is staggering. I love, love, love it.’ – TCS, 5 stars

‘To have written something so nuanced and cleverly-crafted, with its layers of meaning running from the first to the last second, is such an exciting achievement...’ – Varsity, 4.5 stars

‘While the play exhibits a deep sense of sensitivity and awareness, its sardonic wit caused audience reactions that ranged from smirking to irrepressible hysterics.’ – The Tab, 4.5 stars