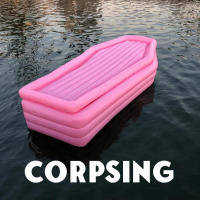 Corpsing is an absurd, haunting dark comedy about the politics surrounding family, grief and how death is understood across cultures, written by Shameera - a very-non-white Malaysian of mixed heritage - and Jamie, whom she calls ‘one of the whitest guys’ she knows.

What happens after we die? For Christina, the answer comes as a shock: nothing. No gateway guarded by an old bearded white man, no ascension into a beam of light, no dark tunnels. Instead, she’s left exactly where she was before – in her body, lying on a hospital bed, her mother just outside the door. There’s clearly been a mistake.

And as she is carted around – interned in a morgue, taken to a funeral home and finally carried through her own funeral – she can’t help but see the absurdity of the situation. From her mother’s insistence that Christina is to blame for this terrible event, to her aunt’s sudden professions of love, to the funeral director’s pretensions to the status of an auteur, and finally to the shambolic religious pick-n-mix of the funeral itself, it becomes clear that the living are far stranger than the dead.

Most of the time, though, she’s just bored. There isn’t much to do when your nerves are no longer firing.

As she observes her own last rites, she is forced to come to terms with the relationships she has left behind. She watches as her family – her confusing, smothering, chaotic, spiteful, beautiful, hilarious family– quickly expose their badly-hidden cultural divides and internal politics.

She slowly realises what she has been trying to hide from: her family, her complicated heritage, and most of all the reality of her own mortality.